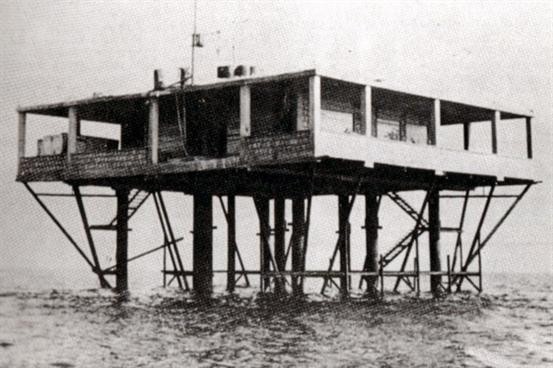 Here is the crazy story of an island like no other.

Let's go back to the 1960s, and more precisely to 1964. A Italian engineer named Giorgio Rosa is authorized to test a new construction technique in the Adriatic Sea, just a few kilometers from the east coast of Italy. Giorgio then imagines a crazy project for his 400 square meter platform, perched 26 meters above the water on iron stilts. Why shouldn't it become a Republic, a micro-nation?

A utopian and anti-conformist vision

Convinced by his idea, and convincing, Giorgio took four of his friends as well as workers in the construction of his artificial island. The project then goes from dream to reality. Problem: this ambition displeases the Italian authorities ... Never mind, this superstructure will be installed in international waters, out of any jurisdiction. And that's good, because it's the opportunity to become independent. In the true sense of the word.

The engineer thus founded a micro-nation: the Esperanto Republic of Rose Island. We are in 1968 and Giorgio Rosa becomes the first President of the Esperanto Republic of the Isle of the Rose. Why stop now while everything is going so well ? He then chooses a government, creates his own currency and even his stamps. The official dialect of the microstate is Esperanto, international language spoken today by more than 2 million people around the world.

On site, the atmosphere is festive: bar, restaurant, nightclub, but also shops and souvenir shops make this island one of happiness. In the wake of the hippie movement, a wind of freedom and lightness blows over the Mediterranean waters. And that is not to the taste of the Italian political class!

Comment put an end to this new political regime who is undermining that of the continent? By accusing him of slander. The island would be a tax haven. Worse, it would hide Russian spy submarines ...

Fifty-five days later it's all over. Military forces land, storming the microstate. And it is with dynamite that the dream of this rebellious utopian ends, letting his remains at the bottom of the sea Mediterranean.

On a mission aboard the Terrible!

Le Gouf de Capbreton and the legend of the giant squid