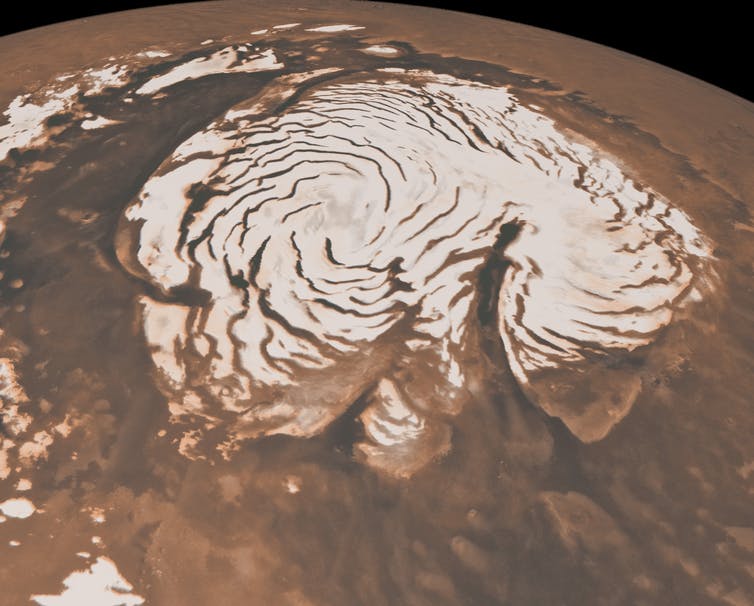 Mars is known for its fine atmosphere, where the CO2 dominates and provides most of the atmospheric mass and pressure, the latter comparable to that found in the Earth's stratosphere more than 30 kilometers above the surface.

But what about water? Water on Mars is currently observed on the surface as a layer of ice at the North Pole several kilometers thick, as seasonal frost at colder times of the year, and in the atmosphere as vapor and ice in clouds. Nevertheless, the Martian atmosphere is extremely dry compared to the Earth: in proportion, 100 times less water is present in the atmosphere of Mars than in that of the Earth. While precipitation on Earth results in water films of several centimeters, the water that would be precipitated on Mars would only form a thin film less than a millimeter.

De new data allow us to better understand why there is (almost) no more water on Mars when it must have been abundant in the past.

Water escapes from the Martian atmosphere

Because everything indicates that Mars was not always the cold and arid planet we know today. Mars exhibits many testimonies on its surface of a distant past - about four billion years ago, where liquid water circulated in great streams and stagnated in the form of basins or lakes, such as in the Jezero crater as the rover Perseverance is exploring for traces of past life.

In order for liquid water to circulate as much and to reside on the surface long enough to make all these imprints, it is necessary to invoke a climate radically different from the one we observe today. Mars, Earth and Venus were arguably accreted from the same basic materials, which means they must have known great similarities very early in their history. But while the Earth and Venus have retained most of their thick atmosphere, Mars, due to its small size and low gravity, has not been able to retain its atmosphere over time.

It is indeed this "Escapement theory" which explains the current thinness of the atmosphere of Mars. This escape occurs very high in the atmosphere, above 200 kilometers, where the molecules have already dissociated into atoms and where the lighter ones, like hydrogen, can tear themselves away from the weak gravity of Mars. Exposed to the energetic particles of the solar wind, this “exosphere” of Mars is also its “Achilles heel”, because over time it has allowed the equivalent of hundreds of current atmospheres to be lost in space.

New data, received from the Trace Gas Orbiter mission from ESA (European Space Agency) and published today in the journal Nature Astronomy, come to enlighten us on the subtle mechanisms which govern the escape of water.

This escape was known to all, especially because Martian water has a composition that is unique to it. Indeed, the isotopes of water, in particular “semi-heavy” water HDO where a hydrogen atom (H) is replaced by a deuterium atom (D) twice as heavy, which one has. measured on Mars since the 80s, reveal a relative concentration 6 times greater in deuterium on Mars than on Earth. This relative enrichment is interpreted precisely as the result of the escape of hydrogen, which gradually left behind the heaviest isotopes, in this case D and HDO, explaining this enrichment ratio of 6.

By extrapolation, the initial quantity of water on Mars must have been at least 6 times greater than now, or the equivalent of a liquid layer of a hundred meters covering the planet. This shows how the HDO / H ratio20 is crucial to project into the youth of Mars and to shed light on the hypothesis of a past hot and humid climate, prior to its habitability.

These results from the Trace Gas Orbiter allow us to better understand the conditions under which water and semi-heavy water present in the lower atmosphere are transported to the very upper atmosphere and then transform into atoms capable of escaping. Indeed, we have long wondered to what extent intermediate processes can modify the way in which hydrogen and deuterium from water access the exosphere. For 20 years, two theories have suggested that hydrogen and deuterium cannot reach the exosphere in the proportions that are theirs in the water molecules of the lower atmosphere. These intermediate processes are on the one hand condensation, which forms the clouds of Martian water ice, and on the other hand, photolysis, which breaks the water molecule and releases a hydrogen or deuterium atom under it. action of UV rays.

Studied in the laboratory for decades, condensation and photolysis are known to affect water and its isotopes in a specific way: this is called “isotopic fractionation”. It is also thanks to our understanding of isotopic fractionation that it is possible to trace the past climatic course of the Earth by drilling ice cores at the poles, where the concentration of HDO reveals the more or less cold climate that reigned. when the water has condensed into ice. It's a discipline where the French community excels, and which made it possible to initiate exploratory work in the Martian context within French laboratories.

On Mars, fractionation by photolysis operates in an opposite way to fractionation by condensation. Above all, the two do not operate at the same time in the course of water - this last point has a major impact on the fate of the hydrogen and deuterium atoms. In fact, the condensation of water vapor tends to concentrate the HDO in the ice formed, and thus de facto de facto depletes the vapor in HDO. Photolysis, for its part, tends to promote the release of deuterium present in the HDO molecule. For a long time, it was assumed that isotopic fractionation by condensation, which makes the vapor poorer in deuterium, dominated photolysis and forced the proportion of deuterium in the exosphere to be lower than in water in the lower atmosphere.

What this'recent study reveals is that condensation actually plays a minor role in the proportion of deuterium in the exosphere. Thanks to the Atmospheric Chemistry Suite instrument of the Trace Gas Orbiter and its simultaneous measurements of H20 and HDO, we were able to show where the hydrogen and deuterium atoms come from, at an altitude and a period of the Martian year where condensation does not have the possibility of interfering with photolysis.

It is indeed photolysis which produces most of the atoms and which dictates the isotopic fractionation of the hydrogen atoms which escape from the upper Martian atmosphere.

Next destination: understanding the path of water, from the surface to the upper atmosphere

This questioning of our understanding of the processes that lead to the escape of water poses a critical milestone in attempts to trace the history of water on Mars. Only the Trace Gas Orbiter satellite is able to reveal the joint concentrations of H20 and HDO. But one another satellite, from NASA this time, MAVEN, is able to observe and characterize the hydrogen and deuterium populations in the exosphere.

A major line of research is emerging from the concomitance of these two missions and it is now possible to envisage being able to describe the complete course of water from the lower atmosphere to the very upper atmosphere, where the atoms which make up escape into space. Only a detailed understanding of this route will allow the community to develop reliable scenarios on the history of water over the last billions of years and thus, the possibility of corroborating the past habitability of Mars where life could. to have emerged.

This article is republished from The Conversation under Creative Commons license. Read theoriginal article.